Many of the head trauma in Glendale cases that our workers compensation attorneys come across aren’t just head trauma. Often, they include head trauma, but they also include neck trauma, back trauma, spine trauma and many other sources of pain. When one part of your body hurts, your entire health is impacted. This can be especially true when it comes to injuries suffered on the job, as many of our clients hope to return to the same job (and presumably, the same motions) over again. In this blog, we’ll go over some different kinds of head and neck trauma, how it occurs, and what we can do about it.

Readers of this blog over a certain age may remember a time when far less was known about concussions and other kinds of trauma. While people may have been aware of concussions and had a vague idea of what they were, the extent of the damage that could be wrought from one wasn’t nearly so prevalent. So, many of us who suffered some kind of trauma to the head at work, school, in an athletic event or somewhere else might’ve been told some version of “shake it off, get yourself together and get back in there.”

Unfortunately, that could worsen the trauma to the head. Instead of seeking care immediately, continuing to try and function with a concussion could lead to bigger problems. Today, that’s not the case. Most people who have suffered some kind of blow to the head and feel those initial concussion symptoms know to stop, sit down, and get help. Better treatments are available for concussions now, too. That way, they don’t have to lead to the lifelong symptoms that many have suffered.

That being said, you need a way to pay for that medical care. That’s where our workers compensation lawyers can come in. When you suffer some kind of blow to the head at work, we can help you to get the compensation you deserve for everything that you’ve had to go through. Once you’ve suffered a concussion, you have to be very particular about when you go back to work. We can help you to get the money to pay for your medical care, doctor’s visits, and even rehab. That way, you can take all of the time you need to rest up, recover, and return to work better than ever.

A blow to the head doesn’t just affect your head. It can cause significant damage to your neck, too. We’ve seen plenty of neck injury cases at our firm over the years. They can be caused in a variety of ways. Maybe the most common way that neck injuries occur is by slipping and falling. If you’re going down a staircase, and there’s something wrong with the stairs, carpet, railing or anything else that causes you to fall, it’s very likely that your neck will take the blow.

These injuries can also be caused through repetitive motions, too. For example, if you have a job that requires you to crane or move your neck often, perhaps to check various items or information, you could suffer a neck injury. That doesn’t mean that it happens on day one, or even during year one. However, over time, doing the same motion over and over again can take a toll on your neck. By that same token, doing the same motion, over and over again for many years in any job can take a significant toll on any body part.

You don’t have to be on a flight of stairs to trip, fall and hurt your neck. Many of our clients have injured their necks by falling over items that were simply placed in the wrong area. Whether through negligence, incompetence, forgetfulness, accident or any other motivation, if you trip over something in the workplace (while in the course of doing your job) you could be eligible for workers compensation.

This is why it’s important to keep in mind that even if the workplace accident is technically your fault, you still qualify for workers compensation. Maybe you placed a box of files down next to your desk, and then you tripped over them, causing a neck injury. Perhaps it was you who just forgot to make sure that the railing on the short staircase next to your area was tightly screwed on, and then when it fell, so did you. Even if you may have caused your accident, you can still receive workers compensation. 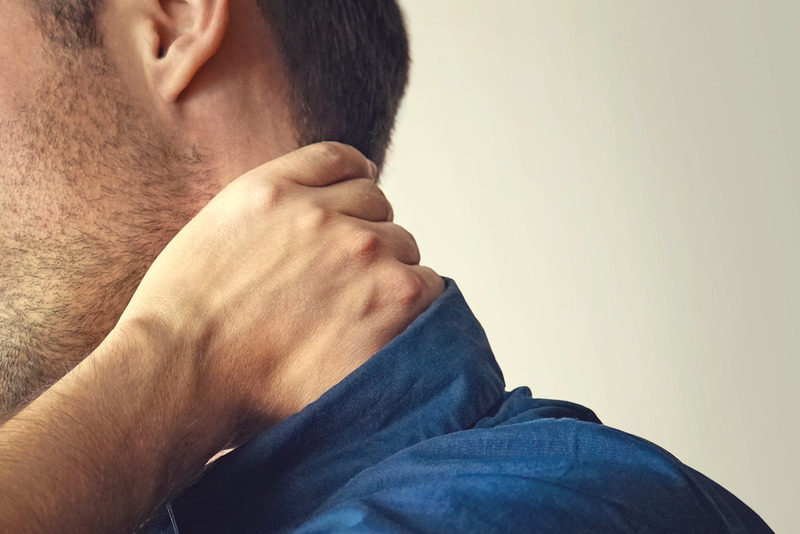 Signs of Injuries to the Neck

The clearest sign of an injury to the neck is, obviously, feeling some kind of pain in your neck. However, it’s important to bear in mind that this is far from the only sign that you’ve suffered some kind of neck injury. Many folks think that, that something’s wrong with their neck only if they’re feeling intense pain in their neck right this moment. However, you also want to be careful if your neck starts to hurt when you’re not at work, too.

Remember, many of these injuries build up over time. Say that you have a job that’s very hard on your neck, but you get through it. You do your job well, and you maintain that high caliber of work day after day. However, one night, while you’re just about to go to bed, you feel a sharp pain in your neck. Obviously, you might think that it had something to do with what happened in that moment. Many times, it could be that the injury just started to hurt you then. This could definitely be something that you should get checked out by a professional.

Other lesser known signs of neck injuries include a decreased range of motion. If you’re suddenly unable to turn your head in a direction, that’s a sign that something is seriously wrong. For example, if you can’t turn your head to the right one day, or cannot do so without great effort, then it’s time to get checked out. In fact, really any kind of sustained muscular stiffness could be a sign that you’ve suffered some kind of neck injury.

The neck, of course, doesn’t exist in a vacuum – it’s connected to the rest of your body. What happens to your neck affects the rest of your being, too. So, many of our clients hurt their neck but didn’t think much of it when they develop headaches or even migraines. Those can come from neck trauma, too. Unfortunately, trauma to the neck rarely stays in the neck. It can go to your hands, legs, shoulders and back as well.

If you believe you’ve suffered some kind of at work injury, it’s important to let your supervisor know. That way, you can get the workers compensation process started. Remember, workers compensation has a series of deadlines, each of which are quite serious. Moreover, they don’t last all that long, either. Time is truly of the essence.

Many of our clients didn’t initially believe they were injured, and we completely understand that. After all, you want to keep doing your job. It’s how you provide for you and yours. You do your job with a sense of pride. But, when you’re hurt, you have to take care of yourself, too. When we say “at work injury” we don’t mean that you had to have suffered some kind of open, obvious wound. Instead, think of “injury” as “discomfort.” One day’s “discomfort” can quickly become a debilitating injury if left unchecked.

If you believe that you’ve suffered some kind of injury at work, you deserve compensation for it. That’s where we come in. You can schedule an initial consultation with us by giving a call at (818) 975-3080 or messaging us through our site.