Of all of the repetitive motion injuries that people suffer on the job, a carpal tunnel injury might be the most common. It makes sense, when you think about it: the people tend to suffer these injuries that spent most of their workdays using their hands, typing on a keyboard, and so forth. These days, that’s practically more workers than ever before. However, we’ve found that plenty of folks don’t realize that they can receive workers compensation for these injuries if they were caused on the job or from doing the work. That’s where we come in.

In your arms, hands, and wrists, you have a median nerve. This nerve is long, and runs from your forearm to your palm. To simplify things, you have Carpal Tunnel Syndrome when this median nerve becomes irritated at the wrist. That may not sound like much to read it on a screen, but it can be incredibly painful, making it difficult if not flat out impossible for you to do your job.

In fact, pain is only one of the symptoms of the syndrome. It can also lead to numbness or just weakness in your wrist or hand. This is not one of those injuries that occurs “all at once,” or in a moment, like dropping a box on your foot or something. No, it tends to build gradually, over time. These injuries are often referred to as “repetitive motion injuries,” because it’s performing the same motion over and over again (such as typing, lifting, moving a mouse, and so forth) that causes and then exacerbates the injury.

To just a common example, this injury tends to start with something milder than pain, like tingling or itching. It can also begin with numbness and even a burning sensation. You could feel it in your fingers, or even in your palm. To be clear: these kinds of feelings happen to people every day. If it happens once, or even now and then, it might not be a big deal. It could be just be one of those things, and then it passes quickly. But, if it lingers or if it gets worse, then you probably have a serious concern. That’s when it’s time to look into a workers compensation claim. 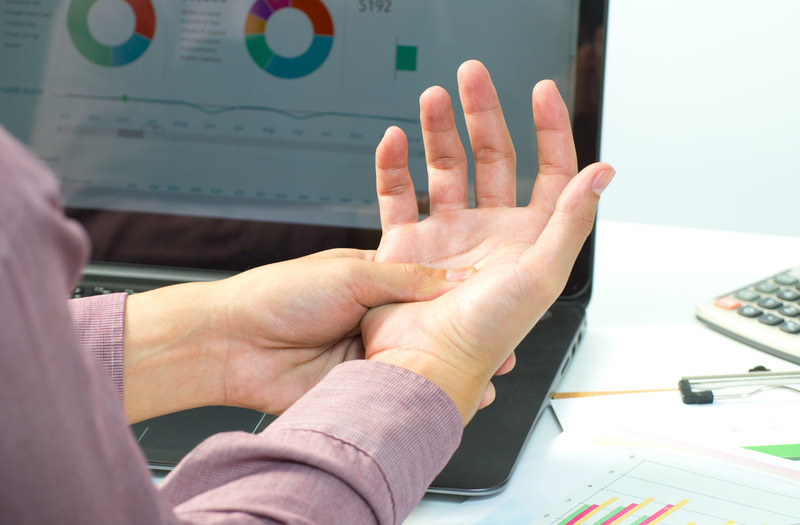 Once You Think You Are Injured

You’re going to want to mention it to your employer as soon as possible. That way, they know that you believe you have it, so that the process can begin. Getting checked out by a medical professional, if possible, is a good idea, too. The truth is that this syndrome is, unfortunately, more common than ever. So, the tools for diagnosing it are far better than they were in even the recent past.

We absolutely understand the impulse to want to “work through it.” After all, in a way, you showed how hard a worker you were to be able to develop this syndrome in the first place. Again, this isn’t something that happens overnight, or during your first few weeks on the job or something. This is a syndrome that comes from working hard, day in and day out at a job, doing the same motions again and again and again. So, it’s probably not in your nature to do something like file a workers’ compensation claim, but it’s important. After all, if you don’t, then you might be on the hook for paying for all of this yourself. This syndrome is not the kind of thing that you can just “let go” and hope that it gets best. Carpal Tunnel Syndrome has to be treated.

Carpal Tunnel Injury: Workers Compensation to Get you the Help you Deserve

We can help you to receive all of the compensation that you deserve for this particular injury. Hopefully, you have a mild case, that can be treated just through over the counter pain relievers, a bit of splinting, or something similar. However, there are other cases that may require prescription drugs, surgery, and more. Besides, when you have this injury, you’re probably going to have to miss some work – after all, that’s how you got the injury in the first place.

At the ODG Law Group, we can help you to receive the lost wages you would have received had you been able to continue working. Additionally, we can work to get you the money for medical treatment, and similar costs. If you believe that you have this or any other kind of on the job injury, you owe it to yourself and the people that count on you to reach out to workers compensation attorneys. To schedule a free consultation with us, all you have to do is message us through our site or call (818) 975-3080.